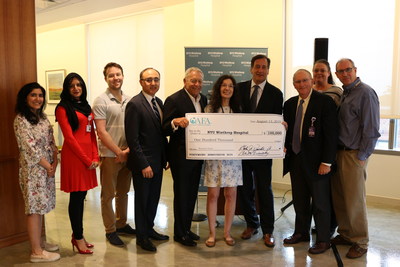 The cutting-edge research will reengineer human cells, collected through a single voluntary blood test, to behave like brain neurons, allowing researchers to achieve what they believe is the closest approximation to brain behavior possible. The brain is the body’s most inaccessible and complex organ, and brain tissue is only accessible post-mortem, making it extraordinarily challenging for scientists to develop new treatments and cures.

Dr. Allison Reiss, head of the Inflammation Section at NYU Winthrop Hospital‘s Research Institute and associate professor in the NYU Long Island School of Medicine, and her team will gather blood samples from individuals living with Alzheimer’s and those without the disease, and reengineer the collected cells to behave like brain neurons.  The research will isolate and examine «exosomes,» i.e., small particles shed from every cell, including neurons in the brain. These extracellular pieces of neuron, or vesicles, carry genetic information regarding brain neurons and can be extracted from blood.  Researchers will investigate differences in this genetic information between healthy individuals and those with Alzheimer’s and, since these reflect differences in actual brain neurons, plan to use the information gained to reprogram Alzheimer’s neurons to behave more like those in healthy people.

«Alzheimer’s disease is a growing public health epidemic.  With the number of Americans living with Alzheimer’s disease expected to nearly triple by 2060, the need for a disease-modifying treatment is critical,» said AFA President and CEO Charles J. Fuschillo, Jr.  «NYU Winthrop Hospital’s cutting-edge research project has great potential to increase understanding of the causes of Alzheimer’s and lead to a treatment that millions of families are hoping for every single day.»

«NYU Winthrop’s non-invasive exosome approach may prove to be one of the best methods for evaluating the human system in order to advance Alzheimer’s research,» said Dr. Reiss. «Examining these particles from brain neurons is like conducting detective work, since they provide clues as to what is actually occurring in the brain itself.»