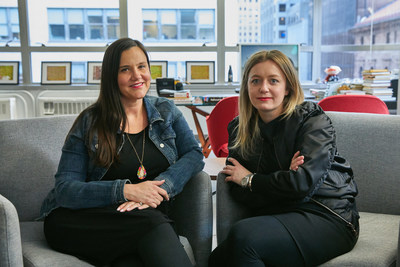 «We’re at a pivotal point in our creative trajectory with opportunities that we can absolutely turn into great work, and we need leaders like Amy and Julia to push the work and level of craft to make the very most of them,» said Beresford-Hill.

Ferguson and Neumann were the first hires at MullenLowe New York, where they were brought in to kick-start the office and serve as creative directors on the JetBlue business. They are credited with the airline’s hugely successful viral Mother’s Day film, «FlyBabies,» which was awarded at Cannes Lions, The One Show, The AICP, The Clio Awards, The Effies and took home the inaugural Athena Award at the 3% Conference, as well as JetBlue’s Office Souvenirs activation targeting workaholics who never take a vacation. Ferguson and Neumann have both been named to AdAge’s list of ‘Creatives You Should Know» as well as Business Insider‘s «30 Most Creative Women in Advertising» list.

Julia Neumann began her advertising career at Saatchi & Saatchi New York, where she won the agency’s very first Cannes Lion for P&G’s Tide. She has also had stints at Y&R New York, Wieden+Kennedy in Portland and BBH New York. Among her most notable work is Land Rover’s «Pathological Liar» and «4 Year Olds Bucket List,» as well as the critically acclaimed «Art Heist for Good» stunt for WaterIsLife. Neumann has been recognized by every top industry award show, including Cannes Lions, The Clio Awards, D&AD, The Andy Awards, The AICP, The One Show and the Art Directors Club. She’s also recently written and directed a short documentary about immigration called Deporting Myself.

Amy Ferguson returns to TBWAChiatDay where she started her career as an intern. She was hired full time as and art director and worked on the Absolut business, helping to create what became the iconic «In an Absolut World» campaign.  She then moved to Grey New York, where she worked on E-trade and produced a wildly popular and awarded «Talking Babies» Super Bowl spot. Ferguson worked as a freelance creative director for several years prior to joining MullenLowe. Freelance afforded her time to work on creative pursuits beyond advertising, including the launch of her own line of greeting cards. She has also served as a juror for several top creative award shows, including Cannes Lions and The One Show.

«Evelyn and Walt have been leading big business and pushing the work forward, and they belong on a level alongside Amy and Julia, steering the agency’s product,» added Beresford-Hill.

For more news from the TBWA network please visit: tbwa.com/news