NEW YORK, June 14, 2019 /PRNewswire/ — Bud Light is celebrating the St. Louis Blues and their first-ever championship by brewing a special batch of beer infused with the sounds and spirit of the Blues’ unofficial victory anthem, «Gloria» as performed by Laura Branigan. 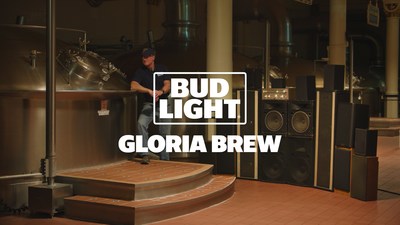 «Gloria is already ingrained into Blues history and the city of St. Louis, so Bud Light is toasting our hometown team by doing what we do best – brewing beer,» said Vice President of Marketing, Andy Goeler. «Just like all Bud Light, our Gloria Brew will be made with the finest hops, barley, water and rice, but this championship beer has one special ingredient – the sound of Gloria. As long-time partners of the Blues, we wanted to do something special for their first championship and we thought infusing this beer with the actual sound of Blues Victory was the perfect way to congratulate the team on making history.»

To create the beer, Bud Light will be playing «Gloria» by Laura Branigan on repeat, 24/7 for the entire brewing process. They’ll also be placing mammoth headphones on the brewery tank to ensure that every note is absorbed to its fullest.  The tank will also be wrapped in decorative Blues colors to designate its championship status and will be signed by every member of the 2018-2019 championship team. Once ready, the beer will be poured into limited-edition championship packs that will be released later this year.

Additionally, in the immediate term, Bud Light will also be releasing special-edition championship aluminum bottles featuring the Blues logo, «2019 Champs» and «Gloria Gloria» to commemorate the big win. These bottles will be available in custom 8-packs and will be available for purchase at St. Louis-area retailers starting in early July.

About Bud Light
Introduced in 1982, Bud Light is a premium light lager with a superior drinkability that has made it the best-selling and most popular beer in the United States. Bud Light is brewed using a blend of premium aroma hop varieties, both American-grown and imported, and a combination of barley malts and rice. The light-bodied beer features a fresh, clean and subtle hop aroma, delicate malt sweetness and a crisp finish that delivers the ultimate refreshment. For more information, visit www.BudLight.com.