NEW YORK, May 10, 2019 /PRNewswire/ — On May 10, 2019, Prague Town, the 300,000 square-meter European-style residential real estate project of Chinese private property developer Zhongnan Group, made its appearance on one of the large digital billboards overlooking New York’s Times Square. Located on the shores of Nanming Lake in downtown Lishui, a city in southwestern Zhejiang province, the 3 billion-yuan (approx. US$441 million) project creates a European-style villa lifestyle for Chinese businessmen who were born in the city, spent time overseas and are now returning home as well as for the city’s local high net worth individuals. 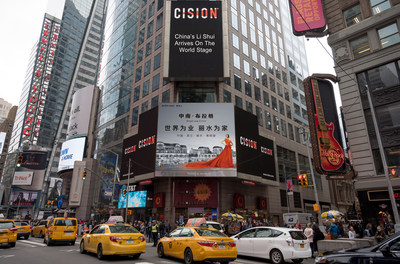 Lishui, a city defined by its hills and known as Zhejiang’s Green Valley, is one of China’s leading eco-tourism destinations and the hometown of many Chinese residing abroad. Many of the city’s emigrants have formed a strong part of the community of overseas Chinese businessmen and played an important role in fostering and building a bridge for Sino-foreign economic, trade and cultural exchanges and collaborations. Over the past few years, an increasing number of overseas Chinese businessmen born in Lishui have returned to their hometown and contributed to the local economy by capitalizing on their advantages in integrating Chinese and western cultures, helping to promote political, economic and cultural exchanges between China and other countries worldwide. Prague Town represents both a new milestone and an ideal living community for businessmen and executives born in the city and who want to return.

Inspired by Prague, a European city renowned for its relaxed lifestyle and poetic scenery enhanced by Prague Square and unique local architecture, Prague Town fits in with Lishui’s urban landscape. Zhongnan Group built the community on the shores of Nanming Lake, emulating the landscape of the European city when viewed from the banks of the River Vltava.

According to the developer’s plan, Prague Town will house international boutiques, world-class restaurants, an exotic market and luxury hotels. In addition, the developer plans to include an international concept featuring cultural and art performances as well as entertainment and leisure health facilities, many of which will front the lake, or be located along the community’s seven business streets and seven plazas. These facilities provide a good fit with the cultural and touristic points of interest in surrounding areas, all of which will come together to raise the visibility of Lishui as a travel destination with a growing reputation. Developed as part of the local government’s plan to lure investment, the project marks an important milestone in Lishui’s growth path and is serving as the city’s gateway to the outside world.

The residential project offers 143- to 185-square-meter stacked villas, 188- to 206-square-meter row houses and 112-square-meter European-style residences and is expected to create a desirable lifestyle for Lishui-born individuals who have chosen to return to their roots.